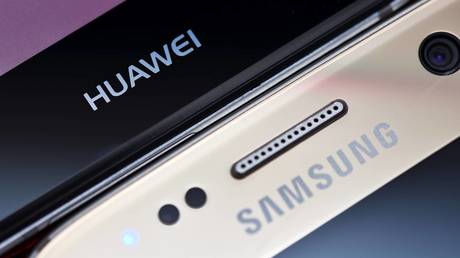 Despite US efforts to pressure Huawei, the Chinese tech giant has reportedly clinched the title of the world’s largest smartphone manufacturer in April, surpassing long-time leader Samsung.

For the first time ever, Huawei had a larger market share than its South Korean rival. The Vice President of Research at Counterpoint, Neil Shah, revealed to tech outlet Gizmochina that Huawei grabbed 19 percent of the market in April, while Samsung shipments were two percent lower over the same period.

Also on rt.com
Huawei’s patent portfolio dominance is its trump card in 5G race with US


It is unclear whether the trend persists till the end of the second quarter or further, as both companies’ sales declined due to the coronavirus pandemic. In the first three months of this year, the gap between the two companies amounted to three percent, with Huawei shipments standing at 17 percent and Samsung at 20 percent, according to Counterpoint Research data.

However, Huawei dominated the massive Chinese smartphone market in the first quarter of 2020, according to other research firm analysts. The rising share on the domestic market can be one of the factors of Huawei’s dominance, as the Chinese economy has been one of the first to reopen after the Covid-19 restrictions.


The advancement in Huawei’s shipments comes despite the company finding itself in the middle of trade and political tensions between Washington and Beijing. Last year, the firm ended up on the infamous Entity List that bars American businesses from dealing with Huawei unless they have government approval.

Washington has also been pressuring its allies to cut ties with Huawei, alleging that the company poses a security threat. In its latest action against the Chinese company, the US government has been attempting to thwart Huawei’s access to semiconductor supplies.