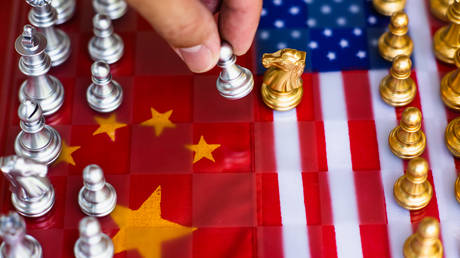 As tensions between the world’s two biggest economies seep into the financial markets, Beijing has warned that pressure from Washington on its companies would severely harm the US economy.

The statement comes as the Trump administration seeks ways to crack down on Chinese companies, making it harder for them to trade on foreign exchanges. On Thursday, President Donald Trump accused China of benefiting from US capital markets “without complying with critical protections” and ordered regulators to come up with ways to tighten scrutiny of US-listed Chinese enterprises within the next 60 days.

Also on rt.com
Would US shoot itself in the foot in imposing sanctions over Hong Kong? RT’s Boom Bust investigates


At the same time, US Secretary of State Mike Pompeo said that China-based firms have a “pattern of fraudulent accounting practices,” as he praised Nasdaq for proposing to tighten listing rules for them.

“American investors should not be subjected to hidden and undue risks associated with companies that do not abide by the same rules as US firms,” he said in a statement, adding other exchanges in the US and beyond should follow suit.

As financial markets have become another front of US-China tensions, more Chinese firms are considering listing on the Hong Kong exchange. The CEO of Hong Kong Exchanges and Clearing, which owns the Hong Kong stock exchange, expects that many companies will return to the Asian financial hub due to US political pressure.


“This is going to be a big year for IPOs, including both huge IPOs from [mainland] China, but very substantial returnees, what we call them, from the United States,” Charles Li said. “Today the atmosphere in the US is becoming less friendly and we obviously have fundamentally changed many aspects of our listing regime so that we are becoming more accommodating,” he added.

Some of China’s most valuable US-listed companies have already announced plans to raise billions of dollars through a secondary listing in Hong Kong. Online gaming company NetEase, which is expected to start trading in Hong Kong later this month, plans to sell 171 million ordinary shares. The listing could raise the company around $2.7 billion and would be the biggest stock offering in Hong Kong so far this year. However, it could be overtaken by another Chinese behemoth, online shopping service JD.com, which also plans a listing in the city.