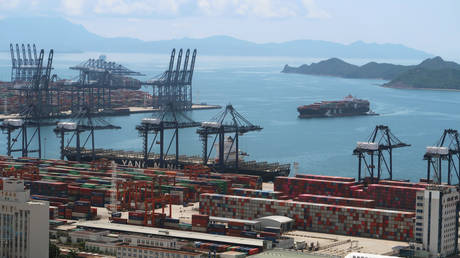 After showing the first signs of growth in April, Chinese exports fell again last month to $206.8 billion, contracting more than three percent compared with the same period a year earlier.

The export data released by China’s customs agency on Sunday was still far better than economists expected, as a Reuters poll of analysts had forecast a seven percent plunge, with those surveyed by Bloomberg predicting a slightly smaller contraction. However, May’s year-on-year fall of 3.3 percent is still a steep decline from the surprise increase posted a month earlier, when exports rose 3.5 percent.

Also on rt.com
China vows to do ‘whatever necessary’ to shield its US-blacklisted firms


The customs figures showed that imports remained severely affected by crashing demand as they fell by 16.7 percent to $143.9 billion over the same period. It was earlier hoped that year-on-year purchases could recover from the 14.2 percent plunge recorded in April.

Some analysts explained that the previous better performance of China’s foreign trade came as factories rushed to fill a backlog of orders when they were allowed to reopen after weeks-long coronavirus quarantines. While the virus is mostly contained in China, which was the first country to be hit by the outbreak, it still raging in other parts of the world, disrupting supply chains and crippling consumer demand.

Also on rt.com
China vows to stick to trade deal with US despite rising conflict


The widening gap between imports and exports drove Chinese trade surplus up to $62.9 billion, the surplus with the US alone reaching $27.9 billion. Combined with fears that Covid-19 could prevent China from fulfilling its trade deal promises to the US, which wants to sell $200 billion worth of goods to Beijing over the next two years, the current trend may further challenge the fate of the accord, given that tensions are still rising between the two powers.